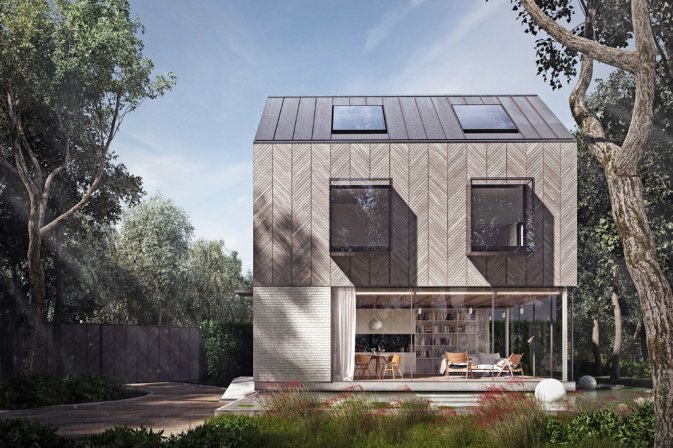 This family house stands amongst dense residential streets in a busy part of West London. The constricted plot is shaped like a horse’s head, surrounded and overlooked by three taller buildings, and can only be reached by a carriage way through the facade of an adjacent Victorian terrace. The paradox of making a new building on a site of almost insuperable difficulty can only be explained by the will of the clients, and their determination to make a new home in this particular part of the city where conventional sites were used up many years ago.

In this design, the accidental but wildly spatial shape of the site has been used to form the living spaces. The interior plan is completely separate from the typologies of the London town-house or the inner city loft, while still retaining a strong sense of dwelling at the heart of the city. Walking around the house takes you across broad spaces, to corners with windows over-looking small gardens, to intimate rooms deep inside. The exterior form of the house that is generated by this varied arrangement is incomprehensible from within. Instead, the form appears unbound and soft, as if an internal force is pressing the walls and roof out against the buildings around it. Like a baroque chapel in Rome buried deep within the city’s close pattern of narrow streets, the expansive interior is a place of escape and dreams.