LiquorishTree Friday 16, September 2016 06:31 PM
@magicsuitcase do they teach art in schools in England? I know they have lots of theatre... want to pick a viable UK career 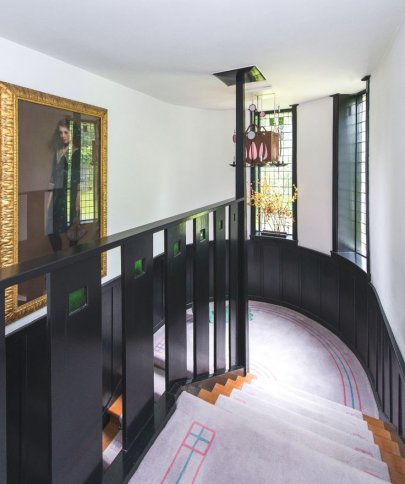 Charles Rennie Mackintosh made his reputation at the turn of the last century as a Scottish architect and designer of great originality. While a young architectural apprentice, he attended classes at the Glasgow School of Art, where he met Herbert MacNair and the sisters Frances and Margaret Macdonald (the latter would later become his wife). Together they formed "The Four, " producing watercolors, posters, and small decorative objects that were published in The Studio. In 1889, Mackintosh was hired as a draftsman at the Glasgow architectural firm of Honeyman and Keppie, where he would remain until 1914. His best-known commissions include a building for the Glasgow School of Art (built in two phases, 1897-99 and 1907-9) and Hill House (1902-4), built for the publisher Walter Blackie in the Glasgow suburb of Helensburgh. Perhaps frustrated by a lack of success at Honeyman and Keppie, Mackintosh left Glasgow in 1914, and by 1920 he had completely abandoned his architectural career. He turned instead to watercolor, a medium he continued to explore until his death. Though virtually unknown in Great Britain in his own lifetime, his work was extremely influential abroad-most notably in Vienna. A direct exchange of ideas between Mackintosh and Austrian designers such as Josef Hoffmann explains the strong aesthetic similarities between their work.

Simple materials and uncompromising forms characterize much of his furniture, and this washstand shows Mackintosh at the height of his powers. Although Mackintosh's design idiom draws on Scottish tradition, the brilliantly colored backsplash depicting geometrically abstracted flowers also recalls German and Austrian Jugendstil designs from the same period. The washstand was made for the Blue Bedroom at "Hous'hill, " the residence near Glasgow that the designer furnished for one of his most important clients, Kate Cranston. Miss Cranston, as she was known, was the proprietress of a group of highly successful tearooms in Glasgow, many of which were also designed by Mackintosh.