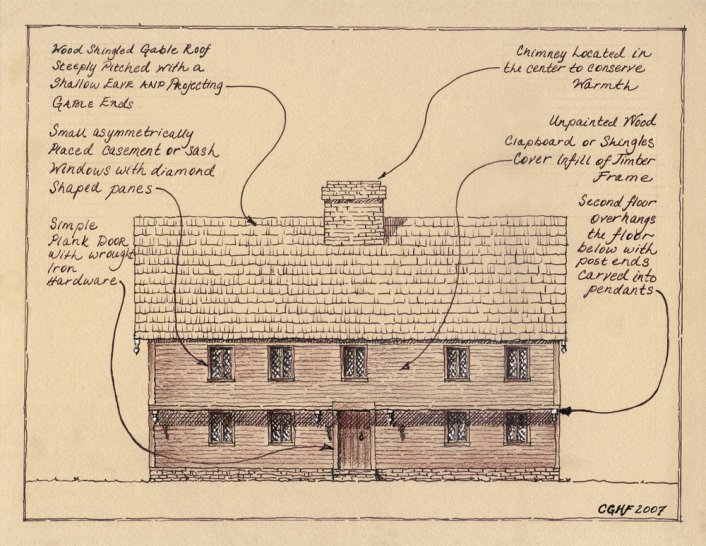 The most popular architectural style in the United States from its development in the early 18th century up to and including the present is what is called ìColonial, î because it evolved during the Colonial period of our history.

The first colonists to New England built primarily one room deep two story houses with a central chimney although single story hall-parlor houses were built as well. By the early 1700s, they have begun adding to the rear to give more interior space. The result was the one and a half room deep saltbox. From these evolved, the four-over four houses that were to come to be called the Colonial style.

By the late 1700s a center hall plan with paired chimneys had come to predominate.

The Colonial house is expected to be symmetrical with two windows on either side of a central doorway. Five windows rank across the second floor. This fits into the Palladian influence upon the architects in England whose pattern books were being copied by builders in the colonies. These influences spread to those building houses for farmers in the country as well as prosperous businessmen in the emerging cities.

As the population from New England spread across what is now New York State into Northern Pennsylvania, Ohio, and into Illinois, they brought this style of teh Colonial house with them.

These houses below represent the development of the Colonial house.

You will find Colonial style houses throughout the United States, but the only real ones are in the original 13 colonies.

All three houses below are modern versions of what is called the Colonial style. Can you compare and contrast them to the houses above? You will note that they are, indeed, similar, but also very different. The house on the right above is the only real "Colonial" style house of all five. Why do you think I say this?

The predominate floor plan for all of these houses is a central hall with stairs, the livingroom, two rooms deep from front to back, with the diningroom on the opposite side of the hall and the kitchen behind it. Bedrooms and baths are above. The houses often have proches and garages attached with perhaps a one or two story EL in the back for a family room.
Source: www.takus.com