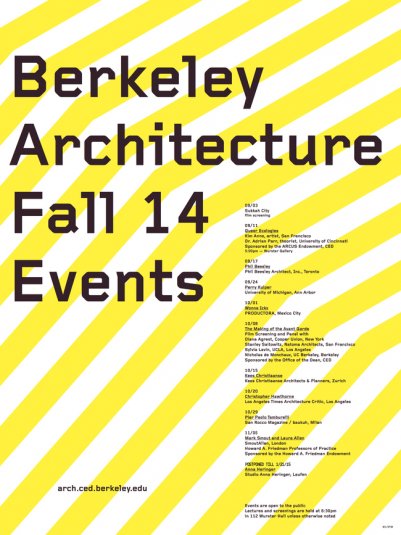 When Gordon Matta-Clark assembled the titles to and documentation of a dozen-odd small, vacant parcels of New York property between 1974 and 1977 (later assembled and exhibited as Reality Properties: Fake Estates in 1992), it was with no well-formed agenda—other than his view that “the availability of vacant and underutilized parcels [was] a direct reminder of the fallacy of renewal through modernization.” Since 1977, the development and proliferation of information-based spatial tools have made the discovery of thousands of such parcels possible in a relative instant. What is more, these tools point to the specific, unexpected utility of vacant space in the city’s fabric, both in New York and beyond.

In this lecture, Nicholas de Monchaux will weave together two stories: The first, based in part on archival work at the CCA, is the story of Gordon Matta-Clark’s unfinished but essential encounter with architectural computing in the 1960s and 1970s—the ghost of which contrasts with much of the development of virtual tools in the ensuing decades. The second is a specific information-based set of de Monchaux’s design proposals around vacant space, titled Local Code. Together, the stories reveal ways to bridge the division between urban and architectural computing that can be traced to the cataclysms and encounters of Matta-Clark’s own technological age.

Nicholas de Monchaux is Associate Professor of Architecture and Urban Design at the University of California, Berkeley, where he serves as Director of the Berkeley Center for New Media. He is the author of Spacesuit: Fashioning Apollo (MIT Press, 2011), an architectural and urban history of the Apollo Spacesuit, as well as the forthcoming Local Code: 3, 659 Proposals about Data, Design, and the Nature of Cities(Princeton Architectural Press, 2016).