astonclinton_rt Friday 16, September 2016 09:06 AM
RT @ousunews: @ousunews Find us in Exam Schools and let us know your burning questions about coming to Oxford🔥❓💬 #AskOxford 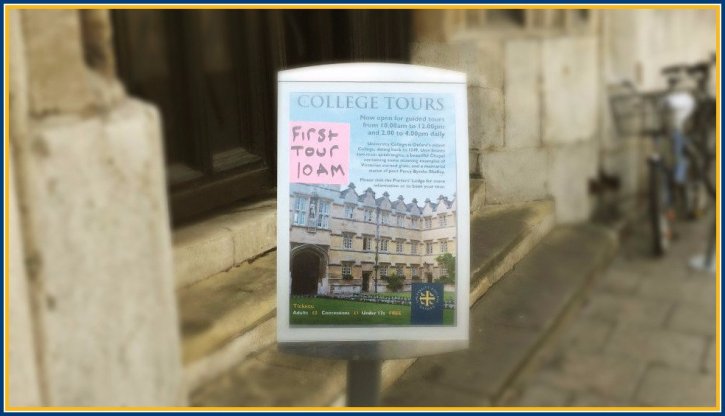 During the era of Medieval England, Oxford University witnessed the establishment of four specific colleges and also monastic colleges. The four colleges were Balliol, University, Merton and Exeter.

Balliol can claim to be Oxford University’s oldest college as it may have been founded as early as 1261 – records certainly show that students existed at Balliol before June 1266. In the 1260’s, Sir John de Balliol took an oath, as a result of a penance, “to provide a perpetual maintenance for poor scholars in the university.” This led directly to the founding of Balliol College. Sir John gave annual payments to the college to support it but it was not until 1282, some thirteen years after Sir John’s death, that the college was given a firm financial footing by Sir John’s widow, Devorguilla. In 1282, the college’s statutes were drawn up.

To begin with, Balliol was not a land holding college. It consisted of a hall and a principal was given charge of the college. The college’s financial affairs were looked after by a Franciscan friar who worked with a secular rector. It was the job of these two men to give out a weekly allowance to the students. Originally, Balliol was only for students studying the Trivium. Once they had gained a Masters degree, they could move on to another faculty.

The original plans for University College, Oxford, were not accepted as the building would have been far too small to accommodate all the students who wished to attend. University College was originally funded by William of Durham. When William died in 1249, he left £207 to support ten masters at Oxford University who were studying Theology. About £100 was spent on loans to scholars who wished to study Theology while the rest was used to buy a large house in which the masters lived and several other houses in Oxford. These houses were rented out and raised about £12 a year in rent. This is how the original University College was funded and the college came into being in c1280. The original large house in which the masters lived is still known as the Great University Hall.

The main purpose of University College was for student to take a course in Theology and ultimately to become a Doctor of Divinity. The tutors at the college were under the supervision of a senior master, who received two allowances; one for his teaching and another for the administrative work he did. In 1292, the position of senior master disappeared and the college was put under the control of a chancellor. In 1311, the college was given the right of self-governance. With the money gained from the rental value of the property bought in Oxford, University College was tolerably well off and bought more property and land as time progressed. This increase in its ownership of property brought in more money – and the college became more and more wealthy.

Merton was founded by Walter de Merton. He held a high position in the church and was seen as an ecclesiastical statesman. He did well financially during his life and decided to use his wealth to develop the university at Oxford. In 1263 he gave over his country estate in Malden, Surrey, to eight scholars at Oxford – all eight were his nephews. He asked Henry III for his permission to move the scholars from Surrey to Oxford. Henry III gave the required permission for Walter to do this and the move was completed in 1264 . The original task of Merton was to teach Theology.