RugbyMonsterBC Wednesday 14, September 2016 05:20 PM
@GUNNS4HIRE has being used in schools in the UK& Unis even for architectural design & other things 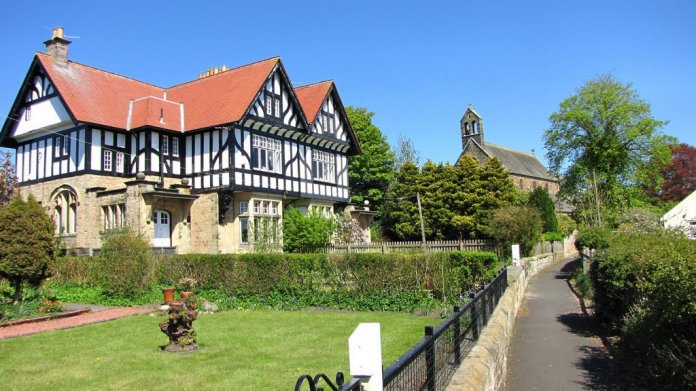 Comparative peace under the Tudor monarchs brought prosperity to England, Wales and Ireland. The wealth of great landowners - the Crown, the aristocracy and the Church - could be poured into building. It was a time of national confidence. Although ripples spread to these shores from the revival of classical architecture in Italy, the Tudor style was mainly home-grown.

The Perpendicular style had already broken away from the European mainstream of late Gothic. In Tudor times it developed fan vaulting, for example in the cloisters at Gloucester Cathedral and Henry VII's magnificent Lady Chapel at Westminster Abbey. The characteristic Tudor depressed arch can be seen in both ecclesiastical and secular buildings.

Another useful dating feature is the Tudor Rose. Henry VII's marriage to the daughter of Edward IV allied the royal claims of Lancaster (badge: red rose) and York (badge: white rose). So the Tudor badge was a double rose, often with a crown above, much used in decoration.

Interest in Renaissance features was largely confined to the educated and wealthy elite. Henry VIII - an enthusiastic builder - used some Italianate motifs. In the 1500s a small coterie headed by the Duke of Somerset went further and built with a symmetry and style heavily influenced by Renaissance ideals, for example at Longleat. These grand experiments were ahead of their time.

In 1577 William Harrison noted the Elizabethan passion for tearing down old houses and building anew. This building boom has been called the Great Rebuilding. From courtiers to cottagers, home-owners were yearning for improvements.

At the lower end of the scale this meant chimneys and glazed windows for the first time. Previously people cooked and ate in the hall with a fire on the open hearth. Once a chimney was added, the hall, formerly open to the rafters, could have a ceiling inserted to make an upper floor. Houses were becoming lighter and cleaner, with more private space.

Tall, narrow town houses made the most of the tightly-packed space within borough walls. Merchants and artisans built storey upon storey, generally living over the shop. Timber-framing was still popular, despite the fire risk. One advantage was that upper storeys could be jettied out over the street, as this example pictured at Plymouth.