Architecture Timeline - Historic Periods and Styles of the West 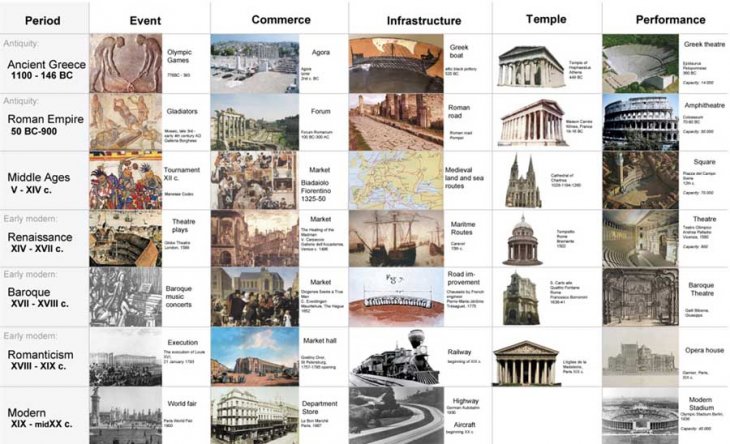 Prehistoric architecture includes monumental structures such as Stonehenge, cliff dwellings in the Americas, and thatch and mud structures lost to time.

Ancient Egypt
In ancient Egypt, powerful rulers constructed monumental pyramids, temples, and shrines. Far from primitive, enormous structures such as the Pyramids of Giza were feats of engineering capable of reaching great heights.

Classical
From the rise of ancient Greece until the fall of the Roman empire, great buildings were constructed according to precise rules. The Classical Orders, which defined column styles and entablature designs, continue to influence building design in modern times.

Byzantine
After Constantine moved the capital of the Roman empire to Byzantium (now called Istanbul) in 330 AD, Roman architecture evolved into a graceful, classically-inspired style that used brick instead of stone, domed roofs, elaborate mosaics, and classical forms. Emperor Justinian (527 AD to 565 AD) led the way.

Romanesque
As Rome spread across Europe, heavier, stocky Romanesque architecture with rounded arches emerged. Churches and castles of the early Medieval period were constructed with thick walls and heavy piers.

Renaissance Architecture
A return to classical ideas ushered an "age of awakening" in Italy, France, and England. Andrea Palladio and other builders looked the classical orders of ancient Greece and Rome. Long after the Renaissance era ended, architects in the Western world found inspiration in the beautifully proportioned architecture of the period.

Baroque Architecture
In Italy, the Baroque style is reflected in opulent and dramatic churches with irregular shapes and extravagant ornamentation. In France, the highly ornamented Baroque style combines with Classical restraint. Russian aristocrats were impressed by Versailles in France, and incorporated Baroque ideas in the building of St. Petersburg. Elements of the elaborate Baroque style are found throughout Europe.

Neoclassicism in Architecture
A keen interest in ideas of Renaissance architect Andrea Palladio inspired a return of classical shapes in Europe, Great Britain and the United States. These buildings were proportioned according to the classical orders with details borrowed from ancient Greece and Rome.

Art Nouveau Architecture
Known as the New Style, Art Nouveau was first expressed in fabrics and graphic design. The style spread to architecture and furniture in the 1890s. Art Nouveau buildings often have asymmetrical shapes, arches and decorative surfaces with curved, plant-like designs.

Postmodernism in Architecture
A reaction against the Modernist approaches gave rise to new buildings that re-invented historical details and familiar motifs. Look closely at these architectural movements and you are likely to find ideas that date back to classical and ancient times.

Neo-Modernism and Parametricism
The name for computer-driven design is up for grabs. Perhaps it began with Frank Gehry's sculpted designs or maybe others who experimented with Binary Large Objects—BLOB architecture. No matter who started it, everyone's doing it now, and the possibilities are stunning. Just look at Moshe Safdie's 2011 Marina Bay Sands Resort in Singapore—it looks just like Stonehenge.

Architectural Periods and Your House

Throughout history, home designs have been influenced by the "architecture du jour." In the not far off future, when computer costs come down and construction companies change their methods, homeowners and builders will be able to design anything for themselves. So, what will the future home look like? You decide. For a history of houses and information about housing styles from Colonial to Victorian to modern-day, see .