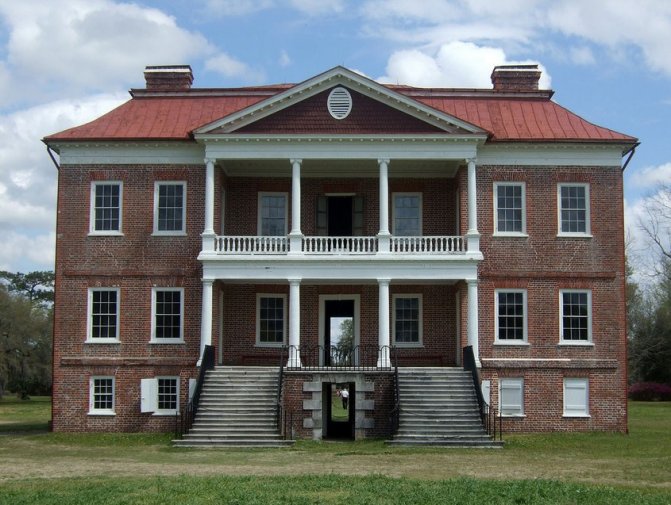 With all those disclaimers established, what characterized Georgian design? More than any other period of English historic architecture, Georgian style is linked with the classical period of Greece and Rome.

Classical influence. The Georgian period was highly - at times almost exclusively - influenced by the classical architecture. An entire generation of aristocratic youth traveled throughout Europe on the "Grand Tour", which was supposed to put a polish on their education. These Grand Tours exposed the most influential class in Britain to the classical traditions of style and architecture. These young men (only very occasionally did women undertake a Grand Tour), came home to Britain fired by an enthusiasm for classical architecture and design.

Country Houses. During the 18th century wealth was accumulating in the hands of fewer and fewer people. Basically, the rich were getting richer, and they put money into their homes. Wealthy landowners enclosed vast tracts of land to create huge landscaped parks, and those parks acted as a setting for grand houses we call "country houses".

These country house estates were dotted with copies of classical temples and other allegorical architectural elements such as grottoes, bridges, and that group of oddments we call "follies". These elements were aligned and joined by sinuous avenues or subtle openings in carefully planted trees and shrubs. The houses which dominated these parks carried on the classical philosophy.

Baroque vs. Classicism. At the beginning of the century, the Baroque movement produced architecture which employed classical elements in a willy-nilly free-for-all profusion. The opulent cascades of ornamental elements of Baroque gave way in the Georgian period to careful - and in some cases rigid - adherence to a sense of classical proportion. If Baroque is "over-the-top", Georgian classicism is understated elegance.

Palladianism. Georgian classicism was most heavily influence by Palladianism, a philosophy of design based on the writings and work of Andreas Palladio, an Italian architect of the 16th century who tried to recreate the style and proportions of the buildings of ancient Rome.

What characterizes Palladian architecture? In a nutshell, grace, understated decorative elements, and use of classical "orders".

Also, a great deal of attention was paid to the alliterative, or symbolic nature of architectural elements. Thus, a mock temple of Apollo (the Greek god of War) was not simply a building, but might symbolize war in the English world. The relationship of that temple to other architectural elements, made a statement of the builder's philosophy. Nothing was "just" a decorative element.

The first popularizer of Palladian style was Inigo Jones, Surveyor-General under James I. Jones was responsible for several early Palladian buildings, notably Queen's House, Greenwich, and the Banqueting House at Whitehall. Later, the torch of Palladianism was taken up by Richard Boyle, Lord Burlington, the foremost patron of the arts during the mid-18th century.

Terraces. The type of building which most characterized the Georgian period was the Town House, often, though not always, joined end to end to create "terraces".

The 18th century was a time of great urban growth. At the same time, the density of settlement in towns meant that there was a need to pack a lot of houses into a small space. This need gave birth to the terrace, which allowed a whole street to be given a sense of architectural wholeness, while keeping the size of houses small. Most terraces were made of brick, with sloping slate roofs hidden behind stone parapets. In fashionable Bath, where local stone was plentiful, brick was used less frequently.

Walls between houses were built thick to prevent the spread of fire. These dividing walls carried the weight of the chimney stacks. Most terraces were four stories high, and the front door was accessed by a short flight of stairs. The most important rooms were on the first floor. [North Americans take note: the "first floor" is not the ground floor, but the first floor up beyond that].

Windows were almost exclusively sash-windows, made of standardized panes of glass divided by thin, delicate wooden glazing bars. The pattern of windowing was the same everywhere; on the ground floor windows were kept short, for stability of the house structure. First floor windows were tall and elegantly expansive, second floor windows shorter, and top floor windows almost square. Front doors are paneled, with a semi-circular fanlight above.

Terraces took several forms; often laid out in straight lines, but also in squares around a central garden space, or in crescents or oval "circuses". These last two curvilinear designs were often augmented with vistas and avenues in brick or masonry, punctuated with stands of trees or gardens.

Building developers. The widespread use of the terrace plan was made possible by the growth of speculative building. Landowners would build rows of terraced houses with an eye to renting the houses to the upper and newly-wealthy middle class. Although many of these land developers hired architects to carry out their plans, some successful architects were developers themselves, notably the father-son teams of Woods and Dance, and the Adams brothers. Many great terraces in Bath are the work of the Woods, while the Dances were responsible for developing terraces in Dublin, and the Adams team held sway in London.

article © David Ross and Britain Express
Ilustrations are based on those in the wonderful volume 'The Observer's Bookof British Architecture', by John Penoyre & Michael Ryan, London, 1951