★    Personally visited. Our own photography. Specially chosen accommodation in Scotland. 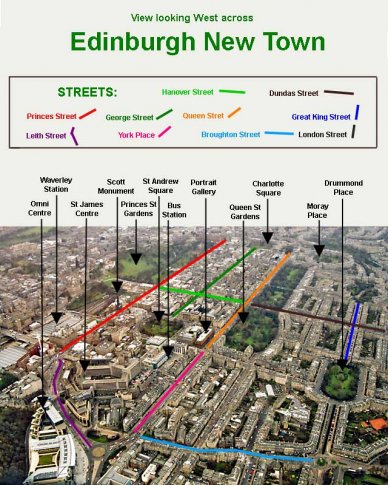 Prosperity in Scotland during the 1700's, combined with wealth consequent to considerable political power now enjoyed by Scots in Parliament in London, led to an explosion of new building. At that time the Old Town was overcrowded, noisy and dirty. Visitors said they could smell Edinburgh as they appraoched Dalkieth some 8 miles to the South. Lack of proper drainage and generally insanitary conditions caused ill-health. It is no wonder that plans were made to build a new Edinburgh, and the site that was chosen was just to the North on a long low ridge of land running from East to West.

Lord Provost Drummond led the initiative. In 1752 Proposals were published outlining his plans. A year later an Act of Parliament ratified the proposals and by 1759 the initial project of draining the North Loch (now the site of the Waverley Rail Station) was begun.

In 1766 a competition for the best architectural scheme was held. 6 plans were considered, and James Craig's scheme was chosen.

Although nowadays Princes Street is commonly regarded as the main street of this scheme, it was not so originally. George Street on the top of the ridge was the backbone of the plan; it was built, at 100 feet wide, 20 feet wider than either Princes Street or Queen Street (parallel to the south and north respectively).

At either end of George Street are two spacious garden squares. The buildings on the North side of one, Charlotte Square, the last part to be built, were designed by Robert Adam, and building began in 1795, three years after his death. Today it remains one of the most harmonious and unified architectural schemes of the 18th Century. The interior of one of its houses, No. 7, has been restored to how it would have been in the 1790's when it was owned by the Lamont family.