Great Court at the British Museum 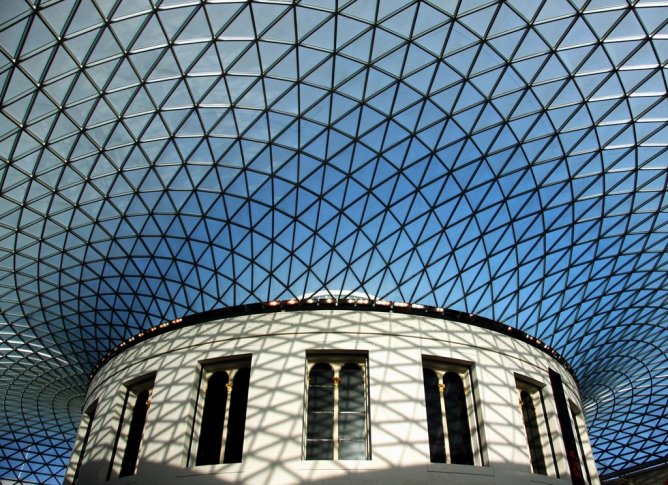 The courtyard at the centre of the British Museum was one of London's long-lost spaces. Originally a garden, soon after its completion in the mid-nineteenth century it was filled by the round Reading Room and its associated bookstacks. Without this space the Museum was like a city without a park. This project is about its reinvention.

With over five million visitors annually, the British Museum is as popular as the Louvre or the Metropolitan Museum of Art. However, in the absence of a centralised circulation system it was congested and difficult to navigate. The departure of the British Library was the catalyst for removing the bookstacks and recapturing the courtyard as a new public focus. The Great Court is entered from the Museum's principal level and connects all the surrounding galleries. Within the space there are information points, a bookshop and café. At its heart is the magnificent volume of the Reading Room, now an information centre and library of world cultures, which for the first time in its history is open to all. Broad staircases encircling the Reading Room lead to a temporary exhibitions gallery and a restaurant terrace. Beneath the courtyard are the Sainsbury African Galleries, an education centre and facilities for schoolchildren.

The glazed canopy that makes all this possible is a fusion of state-of-the-art engineering and economy of form. Its unique geometry is designed to span the irregular gap between the drum of the Reading Room and the courtyard facades, and forms both the primary structure and the framing for the glazing, which is designed to reduce solar gain. As a cultural square, the Court also resonates beyond the confines of the museum, forming a new link in the pedestrian route from the British Library to Covent Garden, the river and the South Bank. To complement this artery, the Museum's forecourt was restored to form a new civic space. Together with the Great Court, it is a major new amenity for London.