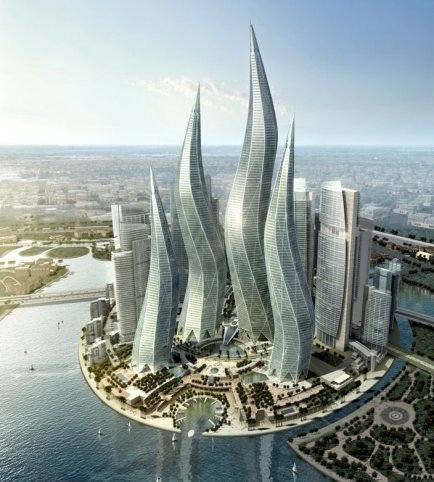 The most obvious characteristic of the Norman Romanesque is its reliance on sheer bulk. Everything is larger, more solid, and carries with it an air of permanence very much at odds with earlier Saxon work. Cathedral and castle walls were as thick as 24 feet at the base.

Although the piers which carry the weight of Romanesque buildings may be rounded, polygonal, or compound, they utilize mass to do their job. In part, the very simple style of Norman Romanesque may attributed to the fact that the builders had to utilize untrained Saxon labour; labourers who had a tradition of building in wood, not stone.

Yet the mass of these early piers may be deceiving. Often the piers are simple brick or masonry shells, with a hollow interior filled with rubble. Essentially the Normans never used two stones when one would do.

Early Norman Romanesque builders used barrel vaulting almost exclusively. To visualize a barrel vault, imagine cutting a wooden barrel down the centre lengthwise. The simple rounded shape of the barrel vault helped distribute the weight of walls and roof. Unfortunately, the distance which could be spanned by barrel vaulting was not great.

Windows were kept small, in part for defensive purposes, and in part to avoid weakening the walls. Buttresses were extremely simple, little more than a thickening of the outer walls in places.

Decorative elements were few in the 11th century; the most distinctive being the Norman chevron (zigzag) pattern, most frequently found on the recessed orders framing doors and windows. Other decoration also relies on simple geometric patterns. In the 12th century you see more elaborate decoration appearing, such as four-pointed stars, lozenges, and scallop shapes.

These decorative elements were carved in shallow relief; it is only as the 13th century nears that you see deeply cut carvings appear. Subject matter for carvings covered Biblical scenes, but also human, animal, and floral shapes. These carvings are most common on capitals.

The most definitive example of Romanesque style in England may be seen at Durham Cathedral, where the Norman work is largely unaltered by later additions. At Durham also you can see the first attempts at ribbed vaulting which would later evolve into the full-blown Gothic style in the 13th century.

article © David Ross and Britain Express
Ilustrations are based on those in the wonderful volume 'The Observer's Bookof British Architecture', by John Penoyre & Michael Ryan, London, 1951